This exciting young string quartet was founded in 2013 and has already won a number of First Prizes in competitions such as the ARD International Music Competition of Munich, the Carl Nielsen International Competition in Copenhagen, and the European Competition of the FNAPEC Concours. They were also named BBC New Generation Artist for the seasons 2017–2019. Not only have they performed at the major concert halls in Europe but also at the most prestigious European festivals. We’re happy to be among the first venues where they will perform in the U.S.

We have already discussed the broad outlines of Franz Schubert’s life in the notes to the September program (online on our CCMS website), so now we can look more specifically into his youth. Schubert’s lifelong love affair with chamber music goes back to his early days. In Vienna then, music in the home was a common event, and the Schubert family had its own string quartet. His brothers Ignaz and Ferdinand played violins, Franz their father played the cello, and Franz himself played the viola (a favorite instrument with Mozart, Beethoven, Dvorak and Hindemith). Franz was the youngest member of the family quartet, and also the strictest, yet respected by the others. When his father played a wrong note, which apparently happened often, Franz would stop the rehearsal and tell his father, respectfully but firmly, that something was not quite right, and his father quickly corrected himself.

Franz received his early musical training starting at age 7 at the Imperial Court Chapel and Seminary where he studied with Antonio Salieri, Mozart’s famous rival. There he sang in the choir, played violin, played in the orchestra and studied musical theory with Salieri himself. In 1813 at age 16, he left the Seminary to attend St. Anna Teacher’s Training College there to study to become a schoolmaster. He only stayed a year, though, and subsequently joined his father’s school as an assistant teacher. It was during these early transitional years that his compositional career started to blossom. At 16, he wrote four string quartets including ours today, his first symphony and some early songs. In 1814 he wrote a symphony, two string quartets, his first mass, and more vocal music including “Gretchen am Spinnerade” (“Gretchen at the Spinning Wheel”) on a text by Goethe.

Graham Johnson’s masterclass, preeminent collaborative pianist and expert on Schubert Lieder, included above because he discusses in depth the details of the song, its interpretation and background. If you prefer just the song, enjoy this performance by famed lieder singer Dutch soprano Elly Ameling. In 1815, Schubert wrote more than 20,000 bars of music, including nine church works, a symphony, and some 150 songs – including eight in one day in October. All of this he accomplished while still a teenager, teaching in his father’s school.

The String Quartet No. 4 in C major is an early effort at string quartet writing for the family quartet, and already shows the beginning of some elements of Schubert’s later style: long singing lines, joyous, bouncing rhythms, interesting interplay between the four instruments. The first movement starts with a short slow introduction in fugal form with each instrument coming in one after the other with the same tune. The second idea enters with all four instruments playing ensemble triplets first, then breaking up that theme into several quick, brief, varied snippets. The second movement is a beautiful song-like piece with a short, serious interlude in its center. The third movement, Menuetto, has come far from the early dance origins of a minuet. True, just like the early dance form it is in 3 / 4 time, and does have repeating sections with a middle “trio”, but this movement is clearly no longer a dance. The concluding Finale-Allegro movement satisfies all the expectations that come with the key of C major. A joyful singing tone and dancing rhythm, sometimes showing traces of Hungarian influence, lead to the work’s more light-hearted conclusion.

The Melos Quartet presents this performance of the quartet. This quartet, based in Stuttgart, was active between 1965 and 2005 and recorded all of the Schubert, Beethoven, and Bartok quartets, to great acclaim. As an added treat, this YouTube link has the score to read along with.

The names of the musicians who were Alexander Zemlinsky’s friends and colleagues are familiar and impressive: Brahms, Mahler, Schoenberg, Szell, Webern. Yet his own name is all but forgotten. Although he was a remarkably influential musician with strong connections to those illustrious men, only recently has he started to be recognized as one of the 20th century’s significant compositional voices.

Alexander Zemlinsky, conductor and composer, was born in Vienna to a Slovakian Catholic father and to a mother of Sephardic Jewish-Muslim descent. He studied piano and composition, and started his musical career in Vienna conducting, composing and performing on the piano His Clarinet Trio attracted the attention of Johannes Brahms, who recommended it for publication. He met and came to be the first and only composition teacher of composer Arnold Schoenberg. The two men developed a close friendship and then became brothers-in-law when Schoenberg married Zemlinsky’s sister.  Zemlinsky’s first major opera composition was conducted by his friend, Gustav Mahler. Through that friendship, Zemlinsky met Mahler’s student Alma Schindler and became romantically involved with her. However, under pressure from friends and family Alma rejected Alexander and then married Gustav instead. (Alma was quite a woman: after Mahler, she had an affair with and married celebrated Bauhaus architect Walter Gropius and then did the same with novelist Franz Werfel. Surely she was the Pamela Harriman of her day.) Zemlinsky married twice, but his first wife died early. His second marriage lasted until his death.

In 1910 Zemlinsky accepted the musical directorship of the Neues Deutsches Theater in Prague, and it was under his direction that the Prague theater became one of the most esteemed opera houses in Europe. His assistants included Anton Webern, George Szell, and Viktor Ullmann. During this period, he wrote much of the music that brought him acclaim, including songs and other vocal music, four string quartets including ours today, orchestral works, and several operas. He remained in Prague through World War I then worked in Berlin and Vienna. After the Nazi annexation of Austria in 1938, he fled to Prague and then to New York. Unlike his fellow émigré, friend and student Arnold Schoenberg who was received and welcomed at the same time in Los Angeles with great fanfare, Zemlinsky lived virtually unknown and neglected in New York and died in 1942 of pneumonia, following a series of strokes. Perhaps we can hear the tumult of his life in our quartet.

Zemlinsky's Second Quartet is a stormy, passionate, “Expressionist” work. This is a term taken from the world of art and poetry. Expressionism was developed as an avant-garde modernist movement at the beginning of the 20th Century. It can be considered a reaction to the ethereal sweetness of impressionism.  Instead of gauzy impressions of natural beauty, expressionism looks inward to the anguish and fear lurking in the subconscious mind. Its typical trait is to present the world subjectively, distorting it radically for emotional effect in order to evoke moods or ideas. An early, famous example from the art world is Edvard Munch’s The Scream.

Hence in this quartet we have violent mood swings, great agitation, tender quiet passages, obsessive turbulence and reworking of the motto, and then final, ethereal calm resolution. It is performed in one continuous movement, though it has several clear segments and moods which are separately marked. This is music that blurs the distinction between tonal and atonal, yet frequently lands on a satisfying tonal arrival point. If there is one thing to listen for, the listener should key in on the opening rising three-note “motto”:

It helps to visualize these three notes and the motto’s rhythm because it appears repeatedly throughout the work, and the hearer will come to recognize it harmonized in many different ways and presented in a wide variety of contexts, providing underlying structure, coherence and unity to the work.

Above is a performance of the quartet by the Vienna-based Artis-Quartet, who were awarded the Alexander Zemlinsky Award in 1997. They have recorded all of the Zemlinsky string quartets and specialize in 20th and 21st Century works. 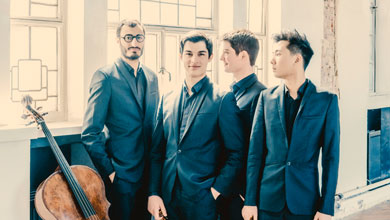 Individual tickets may be purchased at the door (cash or check only) immediately before each concert.

All concerts are held at a private club just off Michigan Avenue in Chicago.